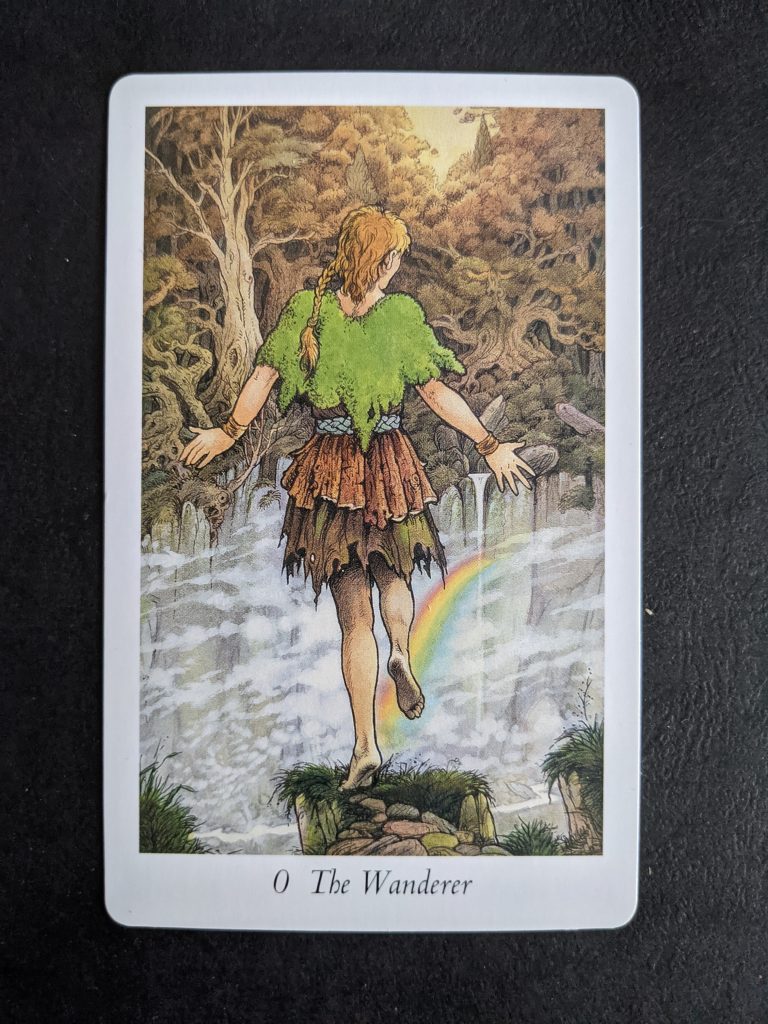 The Major Arcana and The Fool’s Journey

We are now beginning our examination of the Major Arcana. Many people view the Major Arcana as a story called The Fool’s Journey. As you will see, this is easily applied as a description of Odin’s journey through the Norse myths.

The first card of the Major Arcana, card number zero, is The Fool. The Fool is a card of many things, but let’s start with ᛞ (Dagaz), the rune of new beginnings. There is a hint of ᚹ (Wunjo) to this rune, the joy of ignorance and innocence. There is also a hint of trauma to this card, associated with the rune ᛏ (Tiwaz).

When Odin began his journey through life, He made a lot of mistakes right away. Slaying Ymir made enemies of the giants, the Jotnar (singular Jotun). Burning Gulveig made enemies of the Vanir gods (though they were eventually able to reconcile through a hostage exchange and the Aesir were stronger for it). This card shows a youth distracted by the beauty of the world… and about to step off a cliff. Odin’s idea of beauty is a little strange, but He definitely stepped His foot off a number of cliffs.

When looking through my Tarot decks, I thought it interesting to note that some of my decks contained circles surrounding The Fool. Upon closer inspection, they are not circles at all but spirals. The spirals in the Thoth Tarot don’t even look like they fit into 3 dimensions, needing at least 4 dimensions for some of those curvest to be smooth. These are reminiscent of ᛃ (Jera), which could be perceived as a square or right-angled spiral rotated through 5 dimensions. ᛃ (Jera) is a rune of the four seasons as they spiral through time. The Gilded Tarot makes this more explicit than the others by showing the uppermost spiral as the zodiac, the 12-pointed wheel of the year from Hellenic astrology.

Another thing I see is the dog yapping at The Fool’s heels in many decks. This dog could represent Odin’s wolves, Geri and Freki, who go with Him on The Wild Hunt and who eat at his table while He drinks only wine… but I don’t think that is the case. I think that small dog is The Wolf Fenris, frequently associated with ᛏ (Tiwaz or Tyr). The story that most people remember about Fenris is that he ate Tyr’s hand, but the story that would be on Odin’s mind is the description of Ragnarok, when Fenris will eat Odin whole. Everything Odin does from a certain point in the mythology onward is aimed at delaying or preventing the time when Fenris slips his bonds and attacks Asgard.

This last card, from the Wildwood Tarot, is different from every other Fool card because it shows a different perspective. We can see what Odin sees: Beyond that cliff is Bifrost, the rainbow bridge. Bifrost is the path to Asgard from Midgard, and many interpretations say that it is a connection from Asgard to anywhere else in the Nine Worlds. The rainbow is a sign of hope and connection, as exemplified by the rune ᛗ (Mannaz).