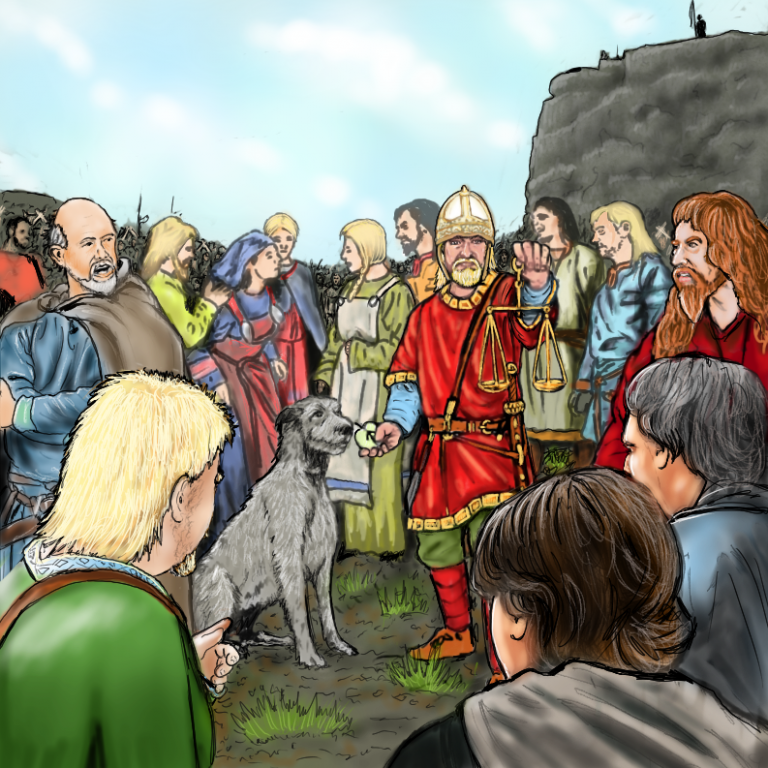 We have finally made it to The Third Aett, called Tyr’s Aett. Be ready for a longer read than usual, because in order to understand the Rune Tiwaz, you need to know one of my favorite stories.

The Rune Tiwaz is associated with the Norse god Tyr. He is known as a left-handed god, as a god of war, and as a god of justice. We also know that he was brave, wise, and strong. He was probably a more important god in the past, but by the time that Norse Mythology gets written down by the Christians, we only get a few stories about him.

The story that most people know of Tyr, and the story that shows his personality the best, is the story of the Binding of Fenris. There are going to be a lot of footnotes attached to this story for those who care about the historically attested version, because the most popular version has some details that are not just historically unattested, they are probably associated with a misreading of an insulting kenning. If you don’t care about the history and just want the way that people tell the story now, please ignore the footnotes. Or you could read The Gylfaginning, a book of the Prose Edda by Snorri Sturlusson which contains this whole story.

The Binding of Fenris Wolf

Loki, the trickster god, was a parent to at least six children, including three who will play a role at Ragnarok. I say “was a parent” because Loki was the mother of at least one of those children, as we will discuss when we get to Ehwaz. We do not know whether Loki was father or mother to the 3 monsters The Midgard Serpent, Fenris Wolf, or Hel; all we know is that he and Angrboda had some scary children.

The Midgard Serpent was thrown into the sea, where it grew large enough to wrap itself around Midgard (Earth) and bite its own tail. Hel was a woman who appeared to be half-corpse1, half alive. She was given a corner of Niflheim, land of ice, over which to rule. She became the queen of the dead.

But the focus of this story is Fenris, the wolf who will eat Odin at Ragnarok. When Loki brought his son Fenris to Asgard, Tyr was the one who looked after him2. Unfortunately, Tyr looked after Fenris a little too well, and The Wolf grew. When Fenris was the size of a horse, the gods of Asgard became worried at his size, and they agreed that The Wolf should be bound.

They came to Fenris with a thick rope and asked him, “Oh, great Fenris, we wish to see your great strength. May we bind you with this rope, to see if you could break it?” Fenris laughed and let them tie him up. He broke the rope nearly immediately. They came to Fenris with a sturdy chain and asked if he thought he could break it. He allowed himself to be bound, and he broke the chain as well.

So the gods went to Svartalfheim, the land of the dwarves, and asked for a chain that Fenris would not be able to break. The dwarves took the breath of a fish, the root of a mountain, the sound of a cat’s footfall, and a thousand other impossible things3, and they forged a red silk ribbon4 called Gleipnir with which to bind The Wolf.

So the gods went to Fenris and said, “Will you let us bind you with this ribbon, to see if you can break it?”

Fenris looked at the ribbon and said, “No. Either you’re trying to trick me, and I won’t be able to escape, or that’s just a ribbon, and there will be no glory in breaking it.”

“What if I place my hand in your mouth,” Odin asked5.

Tyr stepped forward6, “But you do trust me. I will do it.”

Fenris was nervous, and asked, “Okay, but not your left hand. It needs to be your right hand. Your sword hand.”

So Fenris allowed himself to be bound, as long as Tyr kept his hand in The Wolf’s mouth. Fenris struggled against Gleipnir mightily, but he could not break it. “Okay,” Fenris said. “I cannot break free. Release me and I will release Tyr.”

“No, my friend. You will not be untied. Do it.” And so The Wolf bit down, taking Tyr’s right hand. This is why Tyr is a left-handed god.

Tiwaz is similar to the Major Arcana tarot card Justice most of the time when it comes up in a reading. It is a Rune of balance and fair dealing, sometimes of vengeance against one who has done the querent wrong (or vengeance against the querent, depending on the situation).

Another meaning that I have come to associate with Tiwaz is trauma. Unlike on the Strength tarot card, where the woman puts her hand into the lion’s mouth without fear, Tyr loses his hand when he puts his hand into Fenris’ mouth. A large fraction of the Suit of Swords is closely associated with this meaning of Tiwaz.

When I am angry, this is the closest to a curse that I will do most of the time: I will inscribe this Rune and trace it with my finger while chanting, “Justice be done.” I will that the person who has done harm is harmed enough that they will not do harm again, and that those who are hurt are healed.

Many modern practitioners will put this Rune on their sword, claiming that it was historically put on swords. I can find no evidence that this was ever done historically. The spell more commonly carved onto a sword was ᚨᛚᚢ (ALU). We do not currently know what it meant or what it was supposed to do, but it was carved into hundreds of swords and amulets over the course of centuries. It was probably some powerful magick.

1Literally, it says that she was blue/black on one side. This is also a description used for corpses, but you should be picturing zombie skin, kind of like the people rising from the boats on the Judgement tarot card.

2Prior to the Prose Edda, this is almost certainly not true. It comes from the kenning “Fenris’ Feeder,” making Snorri believe that Tyr fed Fenris before the main story. Tyr’s personality as a gentle god of war is almost certainly a modern invention, based on the description from Gylfaginning.

3The original says that these things were real at the time, but that is why you will never see the breath of a fish or hear the sound of a cat’s footfall.

4The original does not say that it was red nor silk. I have just always pictured it that way.

5It says “the gods” asked in the original, but I like to think that it was Odin.

6The original says that “The gods placed Tyr’s hand in the wolf’s mouth,” not that he did so himself. This creates a very different image: that he was fearful, and was forced into doing it. The image of the gentle and brave god that I portray above is a modern understanding of courage.