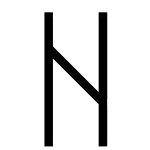 Hagalaz is as close to the Major Arcana card The Tower as you’re going to get with The Runes. That said, where The Tower is a card of separation, of being far from those you love, Hagalaz is a Rune of destruction, with a connotation of starving to death along with it.

Nietzsche said, “That which doesn’t kill you makes you stronger,” but that quote is always taken out of context. The quote is from a tongue-in-cheek book which was subtitled “How to Philosophize with a Hammer.” He actually didn’t believe it to be true: he was making fun of the military when he wrote it. Hagalaz is an example of how it is false.

In Norse Mythology, one of the portents which presages Ragnarok, the end of the world, is a three-year long winter called the Fimbulwinter. After three years without a summer, there will be floods and brother will turn on brother and the gods themselves will be killed by monsters and giants. This is a rune of that destruction.

When I see this Rune in a reading, I point out that something is being destroyed. There is no sugar-coating this rune. When crops die, people starve. This Rune is like the card right before the Three of Swords in a Tarot reading.

Hagalaz is a rune of hail falling from the sky that destroys crops. When you see The Tower, your normal instinct is probably to say that the separation is for the best. This isn’t necessarily for the best. This is a Rune of difficult winters in a time before the invention of the refrigerator and the 18-wheel truck that brings me orange juice in February.

If someone or something has to go, this is the Rune to use. I don’t use destructive magick often, myself. I prefer creative magick. But when I need to destroy something, this rune is carved into my ceremonial axe.