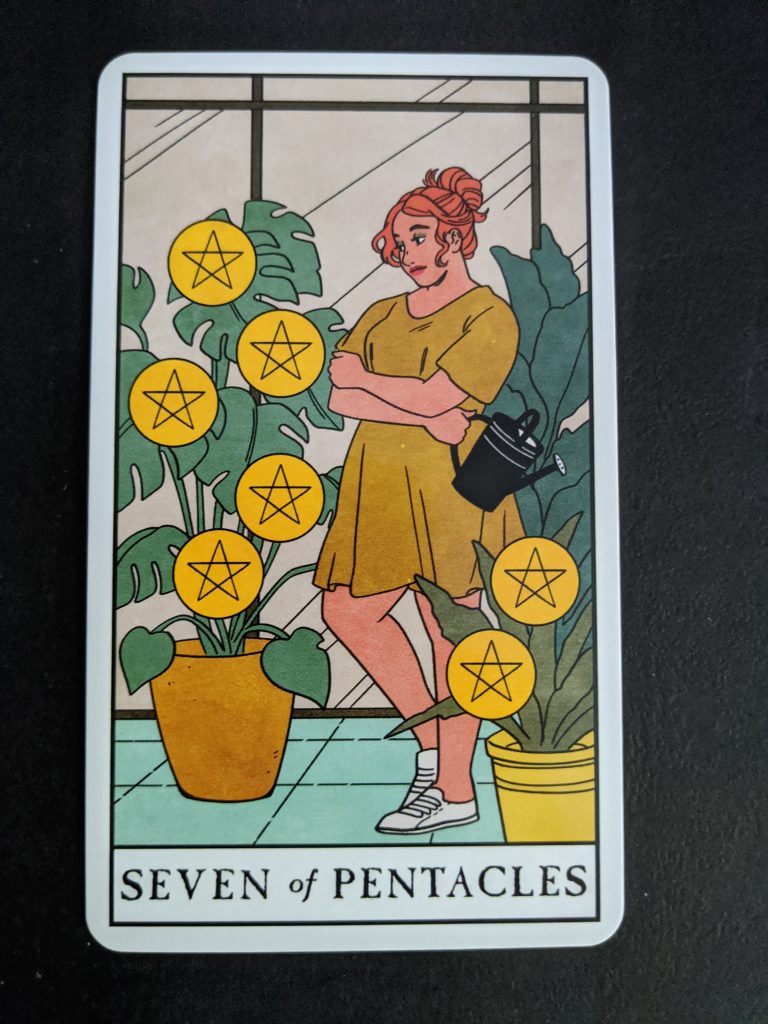 Sevens in the Minor Arcana

The sevens can be interpreted as aspects of ᛃ (Jera): You put in the work, and this is your reward. The rewards are very different in each suit, however, and the amount that ᚦ (Thurisaz) appears varies from suit to suit as well. .

The cards from the Rider-Waite Tarot above depict the transition from ᛃ (Jera) to ᚦ (Thurisaz).

The Seven of Pentacles is the most straightforward ᛃ (Jera) card in the Minor Arcana. It takes a lot of time and work to make plants grow to the size shown in the picture, and she has put in the work. Now she has the harvest.

The Seven of Cups is more like what a student gets when they reach graduation: It is a myriad of possibilities. The symbols coming from the cups can be compared to any rune in the Futhark. The querent has a choice to make and so many great options to choose from. I read this card similar to ᛈ (Perthro), the rune of mystery.

You can choose whichever cup you want, but once you do the contents of the other cups will disappear. You have a lot of good choices right now, which seems great. But having too many choices can be overwhelming.

Loki would love this card. This is a card of deception and sneaking around. Look at Little Red Riding Hood in the picture above. She is sneaking away from The Big Bad Wolf with a bundle of swords in her hands. There is no ᛊ (Sowilo) in this card to reveal her location. Unlike in the original fairy tale, this time Red is the one tricking The Wolf.

Like Loki the trickster god, Little Red Riding Hood isn’t holding one sword in order to defeat her enemy; she is holding a lot of swords in order to disarm her friend by trickery. Watch out for the Loki in your life when you see this card. No, seriously, don’t be overly trusting like Thor. Think about the time Loki tricked Thor into going to Jotunheim without his hammer.

Sometimes the work you put in is at the expense of others. The ᚦ (Thurisaz, conflict) this creates can sometimes lead to blows. The woman in this card is fighting off six opponents at once. She is at an advantage, because she has the high ground, but she is clearly upset at having to fight so many.

Conflicts like this cannot be maintained indefinitely. You either need to actually hit someone (ᛇ), or you need to extend a hand downward to help someone up (ᛗ/ᛖ). You can’t just stand there forever with a stick in your hands.

This card doesn’t show up often in readings for me, because of a motto I hold dear to my own heart: “I don’t want to be at the top. I just want to be so awesome that people want to follow me.”