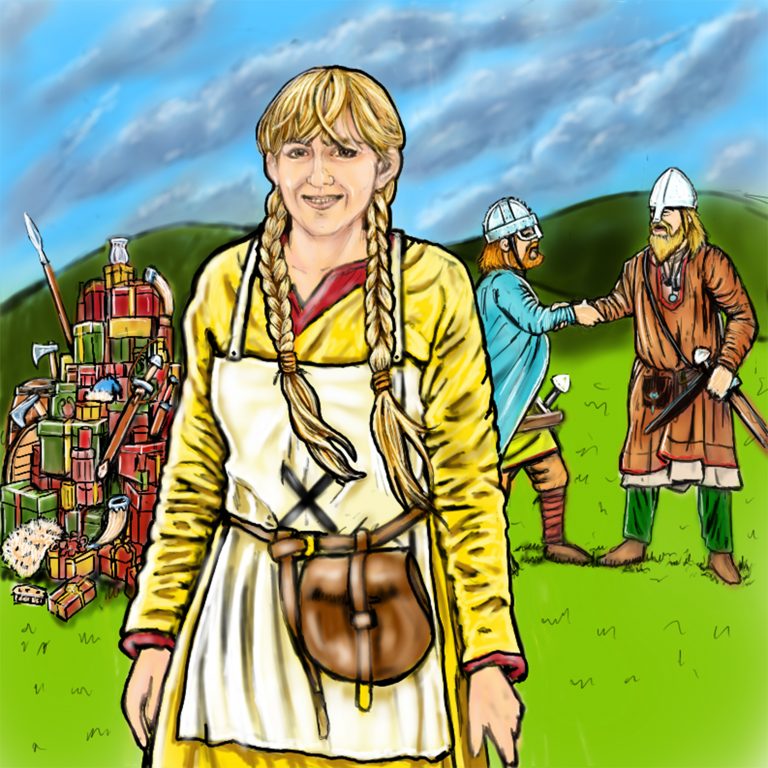 Gebo is the rune of gifts, but don’t think of birthday presents. Think of Yule gifts. I don’t know about your family, but in my family, the tradition at Yule is to buy everyone one present… Except people younger than you. Buy them more presents. I buy one present for my parents, they buy multiple for me and my brother. Children buy one present for everyone, but are showered with gifts.

In the worldview displayed in the Sagas, lords would give expensive gifts to their underlings. Rings, chests of silver, and warships were common gifts for a lord to give a vassal. In the other direction, the primary gift a vassal would give to a lord would be his fealty. (I say “his” because, no matter what you have heard about the sexually egalitarian vikings, the world of the Sagas is a male-dominated world.) The lord would be the money changer, above the vassal, and the vassal would be the beggar on the ground, reciting poetry in praise of his generous lord.

It was actually considered an insult for a vassal to give an expensive gift to a lord, as Thorolf Kveldulfson learned to his detriment when he tried to give King Harald Tanglehair a very nice warship as a gift. When King Harald received the warship, he felt like he was the beggar from the Six of Pentacles before Thorolf, the Moneylender.

The greatest gift a family could give would be a daughter, and the gift in return is called a bride-price. The bride-price was a gift whose value was agreed upon between the two newly united families. It was a token representing that the new husband would be able to keep his new wife in the level of comfort to which she is accustomed. This is similar to, and possibly the progenitor of, our current custom of spending three weeks’ pay on an engagement ring.

(Author’s note: I cheated when I bought an engagement ring. I told the jeweler that it was a birthday gift, and so the exact ring he had shown me for $3,000 as an engagement ring was only $700 as a birthday gift. Don’t worry, my wife knows this story. I’m not getting myself into trouble by writing this. In my mind, I fulfilled my duty to demonstrate my ability to provide by tricking the jeweler into giving me a $3,000 ring at the lower price.)

If I see this rune in a reading, I will ask about a gift they have received. Frequently, it is the first one that pops into their heads. As you know, however, that isn’t always the first one that comes out of their mouth. It may take some digging to figure out which gift it is.

Because of the equal arms of this rune, I use it to try to bring relationships into balance. When I have wronged someone, I will often meditate on this rune to determine what gift to give in order to repair our relationship.

But the primary place this rune shows up is in gift-giving itself. When I wrap a gift, I will frequently wrap a ribbon around it. If I hold a rectangular gift diagonally, the ribbon will form this rune on the top and on the bottom. This is a simple folk magic which is so old that most people have forgotten that they are even doing it.