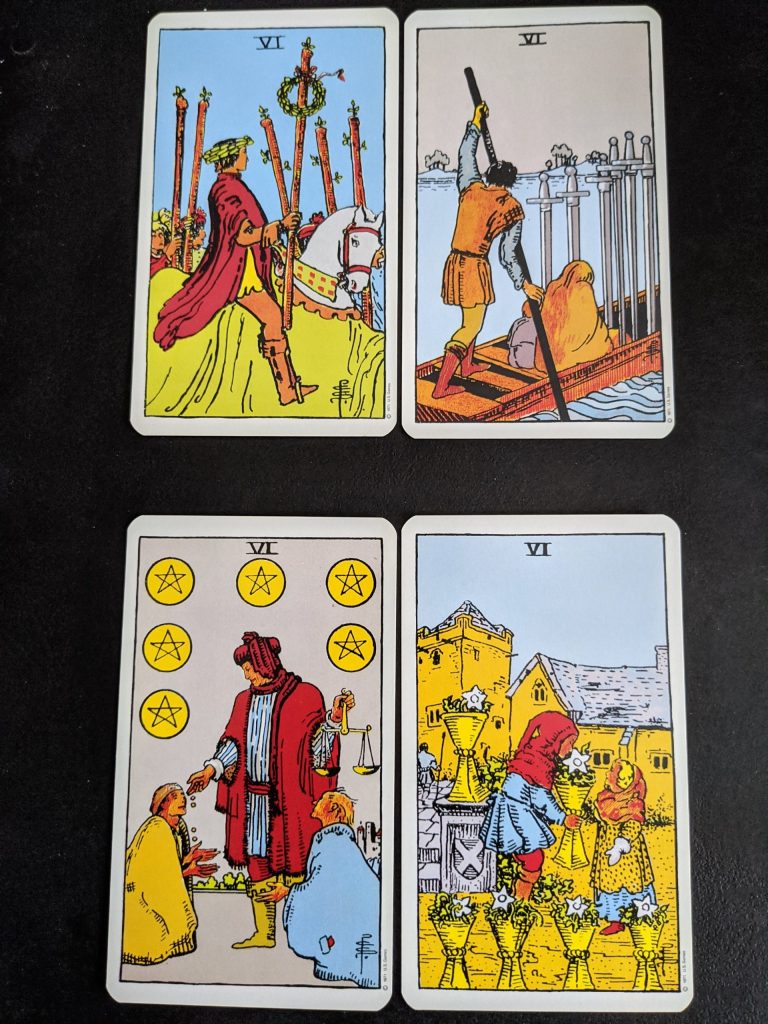 Sixes in the Minor Arcana

This is the purest ᛚ (Laguz) card in the Minor Arcana. Laguz is all about being carried along by the tide, and this card shows a group fleeing from circumstances beyond their control. There is a hint of ᚺ (Hagalaz) to this card, given that they are sailing away with next to nothing. You may also notice a hint of ᛉ (Algiz) and ᚱ (Raidho) in this card: this is a card of protecting those you care about by helping them run away.

In the Lord of the Rings Tarot above, Bilbo has just escaped from the Elves of Mirkwood by the skin of his teeth. The night seems dark, but at least they got out of the elven dungeon in one piece. Looking to the Waite-Smith deck, the sky is pink with ᛞ (Dagaz) as they sail into the coming dawn. No one knows what tomorrow may bring, but they will greet it together.

This is a card of triumph. ᛃ (Jera) is the primary rune of this card: you have put in the hard work, now you get the reward. Note the Web of Wyrd formed by the crossing of the wands, and at each crossing is a victory flame.

I chose the Thoth deck for this card because this is not a card of ᛖ (Ehwaz) and teamwork, despite the fact that it is the first card in the minor arcana of many decks to contain a horse. This is a card of individual victory, of riding high above the crowd around you.

There are two symbols on the card which look like a 4 and an Omega. Those are astrological symbols representing Jupiter and Leo. When those two are together (read: Jupiter is in the Sign of Leo), it means both victory and happiness about that victory.

This is clearly a card of ᚠ (Fehu). The Old English Rune Poem says that we must be free with the giving of our wealth, if we are to gain honor. This is a card of that giving.

The traditional interpretation of this card is of generosity, wealth, and charity, all of which are aspects of Fehu. But I chose the Darkwood Tarot for this card because I want to highlight the darker aspects of Fehu. The wealthy man isn’t holding scales in this version of the card. Scales might lead you to believe that this is a card of ᛏ (Tiwaz).

This can be the card of generosity, and frequently is. But the strings which come attached to generosity should not be forgotten. Think of the Icelandic Rune Poem for ᚠ (Fehu): “Wealth is a source of discord among kinsmen.” Most Tarot readers ignore this interpretation of this card, focusing entirely on the Anglo-Saxon Rune Poem’s interpretation.

The rune of this card is right behind the older child in the Waite-Smith Tarot: ᚷ (Gebo). This is a card of the innocence and simple joy of youth, ᚹ (Wunjo). There is even a hint of the best aspects of ᚠ (Fehu) in this card: This is a card of feeling wealthy because of something alive which can be freely given.

The people in this picture are peasants, not wealthy people who can afford fancy gifts. The gift the older peasant is giving is a flower which grows in every cup in the picture. This isn’t ᛜ (Inguz), where the land is very fertile, because they are in a town or city. This is true ᚠ (Fehu), the wealth which comes from living things and gifts freely given ᚷ (Gebo).