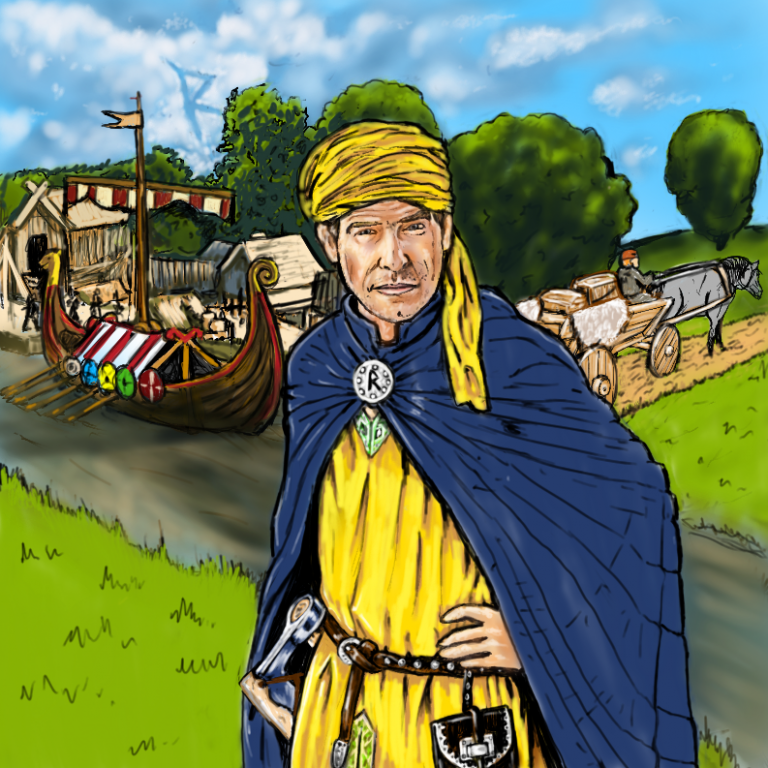 Raidho literally means cart and is cognate with the English word “ride,” so the natural assumption is that this card can be compared to The Chariot. This is true insomuch as The Chariot is a card of movement, but Raidho doesn’t have the same connotation of control or willpower. On the contrary, Raidho is a relatively carefree rune, almost akin to The Fool.

Some people interpret the Eight of Wands as being similar to Raidho. If you assume that those sticks in the air are going up or coming down, then that motion is akin to the meaning of Raidho. It is a rune of moving quickly, over the terrain shown below the rods in the Eight of Wands.

(Note: Despite the river at the bottom of the Eight of Wands, this isn’t a rune of water travel. That would be Laguz, which we will get to in the Third Aett.)

This rune has two different meanings in divination, and it is often difficult to determine which meaning is relevant in a particular reading. While the more literal meaning of “journey” or “travel” is less common, it will really mess up a reading if you miss it. The more common meaning is that the querent needs to get moving.

When Raidho represents a journey, it is up to you to determine whether that journey has already happened, is about to happen, or is currently in progress. When I read for my best friend who has lived in four countries on three continents in the past decade, this is almost always the meaning. (The last reading I did for him, during the pandemic, did not include this rune: he is stuck on this side of the ocean with us Four-of-Swords types.)

When Raidho is instructing the querent to move, it can be akin to Death in the Major Arcana, or it can simply mean to speed up on something they are already doing. This can be a physical journey, but more often it is metaphorical. If this is what Raidho means in a particular reading, then it is often a project that they have been procrastinating or slacking on. Encourage them to get their act together when you determine that this is the meaning for this rune.

Again, as with the divination, there are two ways that I use this rune in my magick.

The first is to provide safety on a journey. I will put this rune under the seat cushions on a long drive or a flight to provide safety as I travel. (Note: When putting it under your seat, just write it on an index card. You don’t want to crush your fancy rune set under your butt on a six hour flight.)

The second use of Raidho is to give a little bit more oomph to certain spells. If I need to make sure that the target of my spell (especially if it is me) takes the necessary steps to accomplish a task, this is the rune of walking the path. In this instance, I will usually include this in a bindrune with other runes related to the task.