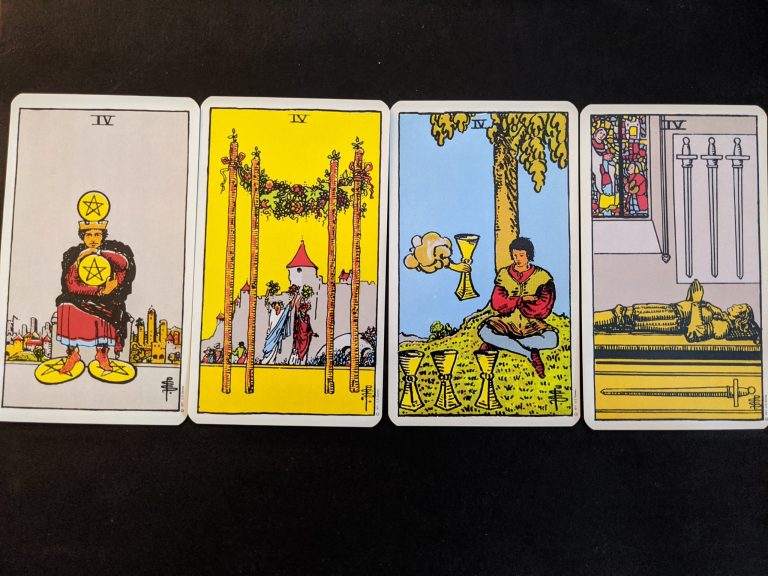 The Fours have this sense of anticipation to them. They are like Isa and Othala, but with a little bit of Kenaz and Naudhiz burning underneath them.

This card is almost exactly how I would draw ᚾ (Naudhiz) as a person: They have everything they need in front of them, and more being offered, if they would just take it. In the Everyday Tarot, shown above, they are looking at the offered fourth cup but not seeing it, not accepting it.

The Four of Cups is the card of having everything you need and it still not feeling like enough. It frequently represents depression and apathy. A typical teenager feels this way pretty much all the time, and will need a little bit of ᚢ’s (Uruz’s) strength to break out of it.

The Four of Wands is almost a card of ᚹ (Wunjo) and ᛗ (Mannaz), of humanity coming together, but not yet. The Darkwood Tarot shows a troll waiting under a bridge for the humans to come. This is a card of ᛁ (Isa). The anticipation is palpable, whether it be for the wedding in the Waite deck or for the meal in the Darkwood deck.

When you draw the Four of Wands, you are looking at a moment that feels longer than it is, waiting for the joy of the next moment to come.

This card is exactly what ᚠ (Fehu) is not. Where Fehu is a rune of generous wealth, the Four of Pentacles is a card of greed and miserliness. This is exactly what the Aesir feared when Gulveig tried to corrupt mankind with a love of gold, and the reason that they burnt her to death three times, causing the Aesir-Vanir War.

The unhealthy obsessions with wealth in the Four of Pentacles is the cause of a large fraction of the tragedies in the Sagas, from Thorgils in Floamanasaga to Eigil Skallagrimson. It is possible that it will lead the querent on an epic quest, but it is more likely that it will only lead to heartbreak.

I joked at the top that this card depicts death, but it is really more a card of sleep than of death. You will notice that, in the Wildwood Tarot above, all four arrows missed him. He is exhausted, and even though he knows he must move on, he is taking a much needed rest.

This is a card of ᛁ (Isa), but unlike the Four of Wands, which is anticipating something good, this is a card of resting after pushing yourself too hard. I always imagine the person in the Four of Swords with racing thoughts: there is so much more that needs to be done, and I know that I need to rest, but I just need to do this one last thing… if I could just move my arms to get it done.

This is the only card that really feels like ᛁ (Isa) to me. The others are saying you’re going too slowly, but this card is telling you to slow down. This is the card where I get to have those great Isa conversations with a querent about rethinking how many obligations they really need to take on, and expanding their personal spiritual practice.