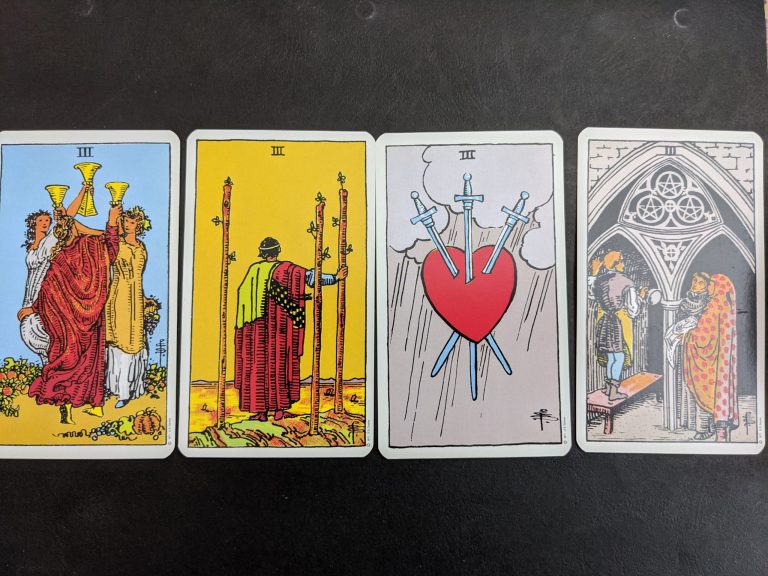 Threes in the Minor Arcana

Threes are all about looking to the horizon, at that which could be. There is a hint of Uruz energy here, but only in the abstract. It isn’t about bulls or slag, but it is about the potential contained in each.

I can think of two orders in which to place the cards: Temporal or emotional. I did neither in the image above.

In emotional order, I should have put the Three of Cups first, for its joyous celebration. Next would come the Three of Pentacles, with its eager expectation. The penultimate card would be the Three of Wands, in quiet contemplation of the sunset. Finally, the Three of Swords, raining on all of the joy and dousing it.

The Three of Cups is what happens when ᛗ (Mannaz) helps ᚹ (Wunjo) throw a party. It’s a celebration, a coming together of the community in joy. Look at the friends dancing and drinking and having a great time! This isn’t a private joy, this is a community joy, the kind that is shared among good friends. This card represents the moments from which beautiful memories are formed.

This card can also be seen as a feminine version of ᛈ (Perthro). Where the Anglo-Saxon Rune Poem describes warriors gathering in a hall, this card displays women gathering in a field.

The Three of Wands is ᛁ (Isa), but more paralysis than rest. It starts with ᛊ (Sowilo), seeing/knowing that there is ᛃ (Jera), a lot of hard work to be done. The frog in the Animal Divine Tarot has his eyes closed, picturing the day ahead, but that day won’t start while he is resting on a tuft of grass. He can see the hard work ahead of him, and he isn’t sure he wants to get off this comfortable patch of grass.

This card is the opposite of the story of Tyr: When he saw what needed to be done, he didn’t hesitate to put his hand into the wolf’s mouth. So when you see this card, tell the querent to be more like Tyr.

The Three of Pentacles represents the process of creation: It includes the skills, the creativity, the teamwork, and the patience to make something new. This card works similarly to ᚢ (Uruz) in its most creative aspects.

Think about the story of Sif’s Golden Hair when you see this card. The Dwarves made the six greatest treasures of the gods, and there is even a hint of the boastfulness inherent in this card when we think about Loki’s description of the dwarves’ work as the best in all the nine worlds… and Brokk’s response that his brother could make even better treasures.

Many people say that the runes are all sadness and darkness compared to the Tarot, but then we get to a card like the Three of Swords, which is heartache, jealousy, and pain… and there is no equivalent rune. I suppose Hagalaz and Naudhiz combined could make a little of this rune, but this is one of the more devastating cards in the Minor Arcana.

The runes would tell the person what they need to do. If the person seeing this card were receiving a rune reading, they would get ᛚ (Laguz), telling them to go with the flow and move on. They would see ᛃ (Jera) telling them to do the hard work of rebuilding their life after the breakup. But in the tarot they get the card telling them that the bad thing has happened, not how to fix that broken heart.