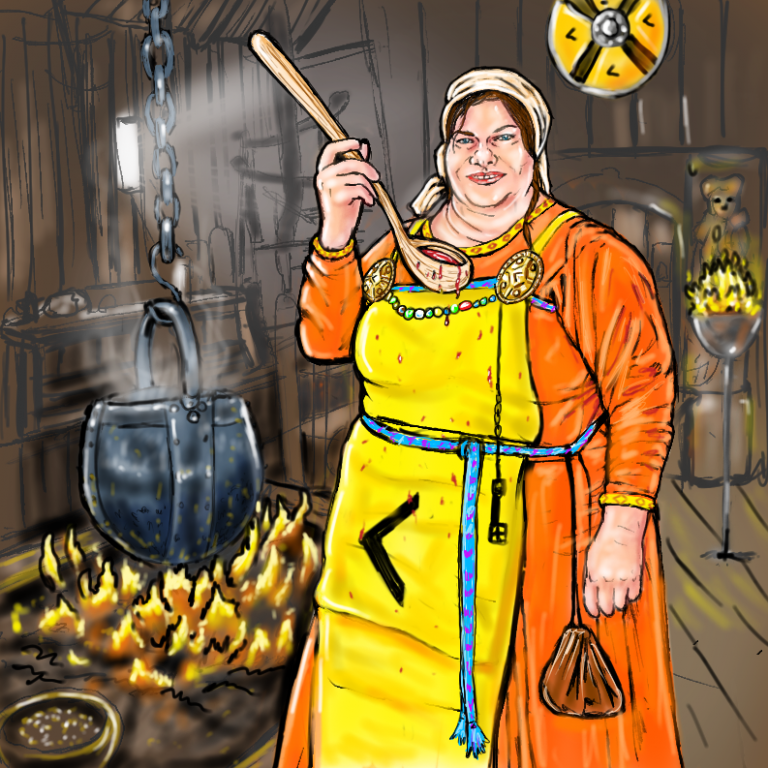 Many Tarot decks make Wands the suit of fire, but Wands doesn’t really have much to do with Kenaz. The Fire represented by the suit of Wands is the Fire of the Platonic four elements, aggressive and destructive. Norse cosmology is not descended from the Western Mystery Tradition which brought these four elements into the 15th century Tarot.

Kenaz has a bit of the warm, maternal instincts of The Empress, but I think a better comparison is an opposite of the Five of Pentacles. Those people who are hurting and out in the cold, despite the warmth nearby, are exactly what Kenaz is not. Kenaz is the warmth, the light, and the shelter from the cold for the injured peasants halfway through the Pentacles.

In Norse cosmology, Fire (Kenaz) and Ice (Isa) are the two primordial elements. In the beginning, there was Muspelheim, the land of Fire, and Nifleheim, the land of Ice. All of creation was formed in the Ginnungagap between the two. In fact, if you look at the runes, every rune can be created by ᛁ (Isa) and a rotation of ᚲ (Kenaz).

The Runes came of age in Northern Europe, where it was cold. To them, fire is a soothing, protecting element. In a longhouse or meadhall, the place you wanted to be seated was in the center, near the fire. The weakest warrior in a band was relegated to the drafty corner, far from the fire.

There were, of course, also the dangers of fires. The Sagas are full of the stories of house burnings and Berserkers who are immune to the touch of flame. From the Eddas, we have two stories. In the Kidnapping of Idunna, a frost giant is killed by a large bonfire. In the story of Ragnarok, Surt (the guardian of Muspelheim) will come to burn Asgard to the ground with his flaming sword.

Given this combination, the fire of ᚲ (Kenaz) seems kind of like a lion who would let a woman put her hand in its mouth. Yes, I’m talking about the Major Arcana card Strength. Kenaz is gentle and only dangerous when used incorrectly.

The two most common meanings of this rune in divination are cooking/food or a person with a “mama bear” personality. As always, it is up to the reader to determine which. Frequently, the other runes around it will help you to clarify what you are seeing.

If I see Kenaz with Raidho, I wonder whether the person is doing a lot of eating on the go. Kenaz with Inguz frequently means that they are eating a lot of fresh food.

When I see Kenaz with Thurisaz, Eihwaz, or Algiz, it is almost always a Mama Bear. Thurisaz means she has already entered the fray, Eihwaz means she is seeking out the one who hurt her charges, and Algiz means that she is in defensive mode with her hackles up. (Also, although I used the pronoun “she” in this paragraph, a Mama Bear can be a man or a woman. I used “she” because the metaphor refers to a female bear.)

The most obvious place I use this rune is in my cooking. When I did the house-cleansing for my current house, shortly after moving in, Kenaz was the rune I used to bless the kitchen. I will frequently draw a Kenaz inside food that I bake; no one will ever see it but me, and it makes the food taste better to know that it is there.

Another spell which I frequently use in social situations is to picture this rune on an index card being dipped in a bucket of water. When tempers are flaring, I will direct this mental image at the group who are getting heated. I will release the energy with a warm laugh. This spell disrupts the situation enough that tempers will often cool, similarly to stomping on a campfire.